Pokémon Centers are buildings in PWO that provides free services for Pokémon trainers. The primary function of a Pokémon Center is to heal player's Pokémons, which can be done by speaking to Nurse Joy at the counter.

Pokémon Centers can be found in almost every major town, and can be identified with their red roof. Some Pokémon Centers are also found near cave entrances and mountains. Areas that feature a Pokémon Center, such as Mt. Silver, tend to become popular training spots and they gather a lot of players. 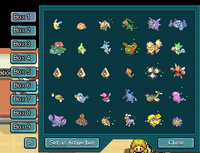 In the building, players also have access to a PC which stores Pokémon that are not used in their party.

Once a player has a full party of 6 Pokémon, the next Pokémon they capture is automatically stored in the PC.

Currently, Pokémon can not be deposited in the PC. They can only be stored in the PC by swapping it with a Pokémon from the user's party; this is done by right clicking on a Pokémon in the PC, and selecting the position in your party that you want the Pokémon to swap with.

The second floor of Pokémon Centers located in Goldenrod City and Saffron City enable trading between other players. To access the top floors, players must register a trading PIN in either Celadon City or Olivine City. Once two users are in the same Union Room, they may trade by using the command /trade username . An alternative method is done by right clicking on a player's name, and selecting the "trade" option.

Nurse Joy is the major NPC in every Pokémon Center. Standing beside her Chansey, she heals players' pokémons after talking to her. She or her Chansey may change their appearance depending on the locations of the Pokémon Centers.

Tourist Information is an NPC in some of the Pokémon Centers. He provides players with town/route/Mt. information, pokémons and quests in the area and gym help. They only exist in the Pokémon Centers in Viridian City, Pewter City, Route 4, Cerulean City, Vermilion City, Saffron City, Route 10, Lavender Town, Celadon City, Fuchsia City, Cinnabar Island, Cherrygrove City, Violet City, and Route 32.

Master Roper Reinhold and Gerlinde are NPCs who introduce Escape Ropes to new players from Kanto and Johto in Viridian City and Cherrygrove City respectively. They give players 5 Escape Ropes if they go through their introductions. Players will be given

1000 if they talk to them after using the first Escape Ropes. However they will not help players with more than one badge.

Mr. Tech is an NPC in Viridian City who teaches new players how to heal their pokémons and access pokémon storage with the computer.

Vendor Thomas is an NPC on Route 4. He sells Escape Ropes and Magikarps for

Security Guard is an NPC in Saffron City and Goldenrod City. Players can enter the KeeboCorp Union room after entering the correct passwords for the accounts they have opened in Celadon City and Olivine City.